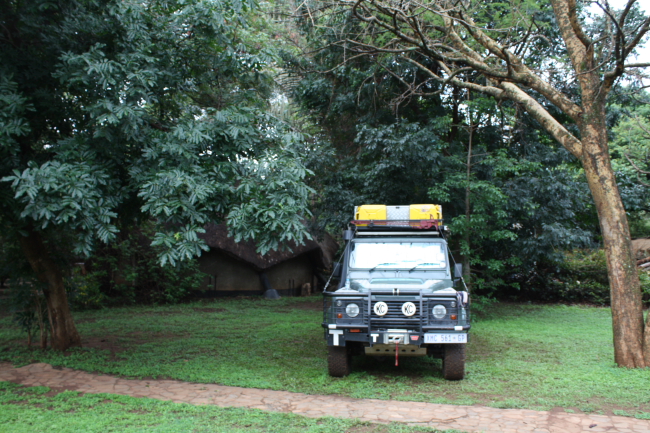 We got up early as driving to Lusaka was a long stretch – but apart from this, the road conditions and amount of trucks we encountered on our way made for a pretty long trip.

We woke up to a very cloudy and rainy Bridge Camp. It was drizzling when we started to get ready to break up camp. Gareth and Tracy from Tanzania were also getting ready – they were on their way back home as well.

It’s always challenging breaking up camp when it rains – apart from the fact that you get pretty soaked in the process, the tent, awning and everything else gets wet and makes it very difficult to fold up properly. In the end we usually end up with everything getting stuffed into the Landy with the promise of sorting it out when we get to our next destination.

I think we had reached a record setting up and breaking up camp. From the start (and with no rush) to the end, it takes us about 23min. I’m really chuffed with this – just motivates you when you have to set up camp in scorching heat 30 times during your holiday.

The road to Lusaka was uneventful – apart from some rain showers – pit stops for a quick coffee (that we usually make at the side of the road), we stopped at our favorite shopping mall in Lusaka (East Park Mall) to stock up on some much needed groceries, ointments and data cards.

The Pick n Pay in the East Park Mall in Lusaka makes me jealous – not even our biggest Pick n Pay in Pretoria has so much variety to choose from. The only thing that we are never – EVER able to find in Africa grocery stores is Melrose Cheese spread. We usually get directed to the yoghurt section and with a quick “here you go” by the shop assistant – and then we usually go away without any. We also bought some much needed cold drinks and water. I also found the most divine shower gels in Lusaka that I stocked up on (to the dismay of Pieter who rolled he’s eyes asking me WHERE do I think I will find space for these)?

When we stopped at Eureka Camp, we could see evidence of the heavy rains that fell whilst we were in Malawi. The muddy road leading up to the reception was a mess – but the rest of the grazing grounds looked amazing.

This time round, we had a more sober receptionist at Eureka and we were quickly told we could again camp in the same spot we did last time round.

We set up camp – waited for the rain to start … again … and got into the tent for a late afternoon nap.

We woke to the sound of disco music – and a very loud DSTV channel where soccer was being played. And that pretty much summed out the whole night … until midnight Pieter and I could literally hear word for word the soccer score accompanied by cheering, laughter and LOTS of partying.

We has still yet to see the so called “Australian Owner” of the lodge. I have my doubts … But, at least Pieter got to make a new friend with one of the local boys who helped him with the dishes – and in the process losing a teaspoon (that and also the “imported” flip flops from Maun Pep Stores that Pieter bought in 2006 that tore in Malawi – were the only “casualties” of our trip).

Eureka Camp has SUCH potential – but again – as so many of these African lodges – they have potential but rely on their drinking and eating facilities to generate money.

Will we stay at Eureka again? Not sure. Maybe. We were the only campers on the site (which made it very easy at the ablutions), but the lack of grass makes for a mess when it rains. The noise and absolute disrespect for the privacy of campers leaves me doubting if we will camp there again. Pity … soooooo much potential.

When the music and noise died down at about 2:00am, we eventually got some sleep – minutes after the rain started up again.