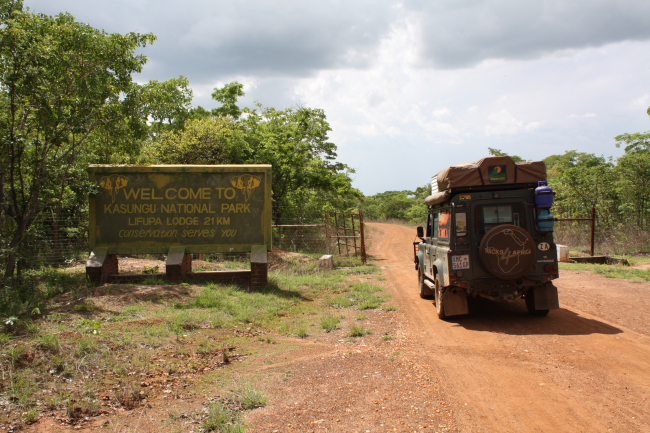 Funny enough how excitement can make you forget about being tired and run down. THIS was the day that we would be crossing over to Malawi.

We packed up camp early and set off to Spar to buy some last minute goodies.

Again, our Carnet de Passage saved the day. We were called in from the back of the queue at the border and helped super-fast. We received the same quick service at the Malawian side.

The rains had just started in Malawi, and all along the road you could see people working on planting and maintaining the vegetation. This is by far, the most beautiful country Pieter and I have ever visited so far during our travels.

Our stay for the next three days were the Kasungu National Park at Lifupa Conservation Lodge. This would be the first time leaving home that we would be staying over for longer than one day. A break well deserved as we were really tired and very run down.

We drove into Kasungu town to exchange dollars for kwachas at the Bureau de Exchange. Unfortunately it was payday for the local folk, and Pieter had to stand in long queue before he got helped.

When we eventually got underway, the temperature was 43degrees and the humidity very high. We felt like pouring bottles of water down our throats, just for it to evaporate within minutes by sweating it all out.

From the turn off of the main road up to the entrance of Kasungu National Park, it is 56km. Gravel road. Corrugated road. Water damaged road. TERRIBLE road.

When we eventually pulled up at the Park entrance, we were surprised that an additional park entrance fee applied. Be booked online and paid in advance. Lucky enough Pieter had kwachas with him, and the KWA47 000 was paid.

When we drove up to the entrance if Lifupa Lodge (the only lodge that you can stay at in Kasungu National Park), Isaac and he’s staff awaited us. Little did we know that in a park of 256 000 hectare, we were the only guests they had.

We wanted to stay at Kasungu National Park as this was part of our “pay it forward” initiative that we opted for this time round. Last year at Senga Bay in Malawi at a place called “Cool Runnings”, we met Jess and Daniel – two young people from Australia. Almost at the end of our stay at Cool Runnings, Jess told us about her dad that runs the anti-poaching initiative at Kasungu National Park. She even went as far as to invite us for Christmas lunch – an invite that we greatly accepted. Pieter unfortunately injured he’s leg and we had to make our way back and could not get to Kasungu.

Back in South Africa I felt bad and wanted to make contact with Jess to explain why we did not pitch. I could only find a lady that at some point did some research with Mike Labuschagne (Jess’s dad) on the internet. I emailed her and she promised to forward it to Mike (which he said he never received).

At Cool Runnings I promised Jess some body butter and shower gel. This time round, I made up a gift bag for her as a peace offering for missing the lunch.

Isaac confirmed that Mike was still working at the lodge. He walked us to reception and proudly showed us he’s “kingdom”. He has been part of Lifupa for many years. He showed us the chalets, the restaurant, entertainment area and deck overlooking the dam where plenty of hippos were lazing around.

After paying our dues, one of the staff members showed us to our camping spot. We camped on the banks of the dam underneath a beautiful shaded tree. I imagine peace and tranquility to pretty much look like this.

Isaac promised to let Mike and Jess know that we were there and that we would like to catch up with them during our visit.

Just before we started setting up camp, one of the anti-poaching men drove up and asked why we wanted to see Mike. Before I could start explaining, he pulled out he’s mobile phone and phoned Mike. I guess Isaac misunderstood us – thinking that we wanted to see Mike to complain.

I chatted to Mike on the phone an explained to him – and he promised that he and he’s daughter (Shannon) will come by later on during the day. Jess was back in Australia, but he would gladly collect her gift.

We set up camp and just before dawn Mike and Shannon pulled up and introduced themselves. In life you get to meet people. Some stay a mere memory, and some make a lasting impression. Mike and Shannon made a lasting impression. The staff at Lifupa lodge talks highly of Mike and the work that he is doing. I think he will forgive me when I say that at first he looks like a biker – tattoos and all. But when he starts talking ALL conceptions disappear and respect shines through. Shannon is a beautiful young lady. She looks like Jess and has the same friendly manner about her. I gave them Jess’s presents, but told Shannon I’m sure Jess would not mind if she uses some of the shower gels.

Mike and Shannon departed, and Pieter and I were left with the most quiet and tranquil peaceful setting ever. We overheard the hippos in the water. The Puku’s grazed in-front of us and we also saw a couple of Kudu’s approaching the water.

We showered and got into bed. It was a long day, long drive and the heat was absolutely killing us.

The next day we woke up to the most beautiful sunrise – mist on the dam and hippos in the water. The best way to start a day! We did some washing and explored the area a bit. At some point in time, Kasungu National Park must have been the hub of activities. The entertainment area in the camping grounds have a fireplace and well equipped kitchen and ablutions. Unfortunately the lodge has not had many visitors in the last couple of years and things are steadily deteriorating at a pace. With Mike there, the poaching has halved and much of the illegal activities have died down. Mike is hoping to have a permanent structure in place where an anti-poaching unit can be run from and financed by the Malawian government.

We spent the rest of the day lounging around and waiting for our washing to dry. We booked a tour at “Black Rock” for later that afternoon at 16:00. At Black Rock you can view the most amazing sunsets ever.

Pushke was our guide to Black Rock. At 16:00 he came and picked us up with the lodge’s vehicle. A very run down Pajero that has definitely seen better days. But we made it to Black Rock and back with everything intact.

Pieter opted for climbing the huge rock with Pushke – I opted for “guarding” the Pajero. Pieter later on confessed it was a steep climb and at places he did see Pushke move away the snakes on some of the overhanging rocks.

On our third day, Mike and Shannon came around again to say their goodbyes as we would be leaving the next day. Always sad to part ways, but we will definitely be seeing Mike and Shannon again in future. Thanks for making our stay at Kasungu National Park a highlight of our trip. We will spread the word and urge people to come to visit – all worth it.

We stayed up as late as we could to enjoy the abundance of stars … wishing we could capture them on film. Sad to leave …

When you do decide to visit this park, be aware that you are going to encounter various bug bites, including tsetse fly bites (that really hurt and stay that way for some time). Make sure you have enough bug spray for your tent, as well as for yourself. Make sure you have the right ointment – and enough of that as well. We tested over 10 makes of ointments that various people (including doctors) recommended. In the end, Iodine was the only ointment that really helped.

As we were assured at Lifupa, the World Health Organisation regularly tests the tsetse flies in the area – and they are not the carries of “Sleeping sickness”. You can rest assure that you won’t get sick when stung.