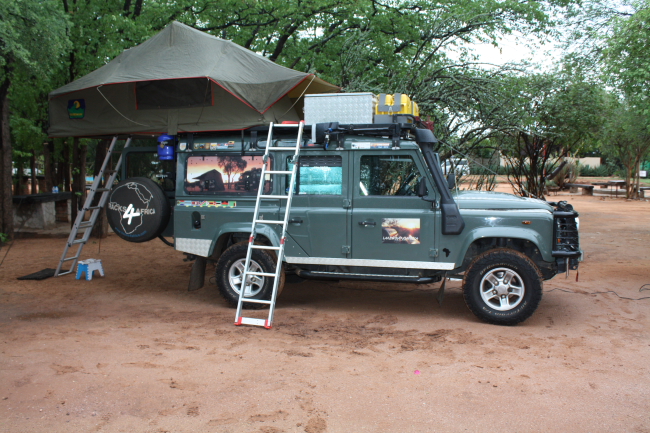 This was the first day of our December summer holiday and our trip to Malawi started early in the day when we packed our last things and said our goodbyes to the family. This trip was aimed at revisiting some of the familiar places we saw in 2015, see some old friends we made during our last visit, as well as to explore new places we last missed out on.

The first leg of our trip took us from Pretoria in South Africa to Palapye in Botswana. For the first time ever, we were the only people on both the South African as well as the Botswana border posts. Absolutely amazing to walk in, be helped within minutes, pay what needs to be paid, and walk out again. We spent our first night at Camp Itumela in Palapye – a familiar campsite that we have visited often in the past on trips to Botswana.

Traveling north on the N1 from Pretoria we came across roadworks in between Bela Bela and Modimolle where they were busy resealing the road surface and where traffic was directed into one lane. In the process some of the tar ran off into the lane that the traffic was directed to and there were no other way but to drive through it.

It was only when we stopped in Mokopane (Potgietersrus) at the local Wimpy that we realised how much tar had actually spread onto the Landy. The one side of the Land Rover was completely covered in sticky black tar.

We stopped at a local AutoZone Store and bought Holts Tar remover. At Palapye we would try and salvage the damage.

After setting up camp in Palapye – keeping an eye out for the pending rain storm, Pieter tried to get the tar off. The instructions on the can recommended you spray it on, leave it for a few minutes and then wipe it off. Unfortunately, that did not work – it just smeared the tar all over the cleaner parts. Pieter then sprayed it, wiped it immediately, and it worked like magic. Thankful of this, we celebrated our success with a Bavaria Shandy.

It however needs to be mentioned that setting up camp did not go as smooth as it did in the past. We were in the midst of a rainstorm, and when Pieter pulled the tent open, liters of water came gushing down landing on him and completely soaking him. We had to sit down and laugh at the irony of it all.

With some more rain pending, we decided to make an early night of it and showered. The ablutions at Itumela are not covered – no roofing or ceiling of any kind. All “natural”. We were aware of this as previously this was also the case. It does seem as if things in Itumela are slowly but surely picking up. Plenty of roadworks in Botswana pay off at Itumela as many of the road workers make this their basecamp where they stay.

We even saw the old dog (no name though) that we did previously. And even she still looked well. Some new-comers are the turkey, the chicken and a new puppy.