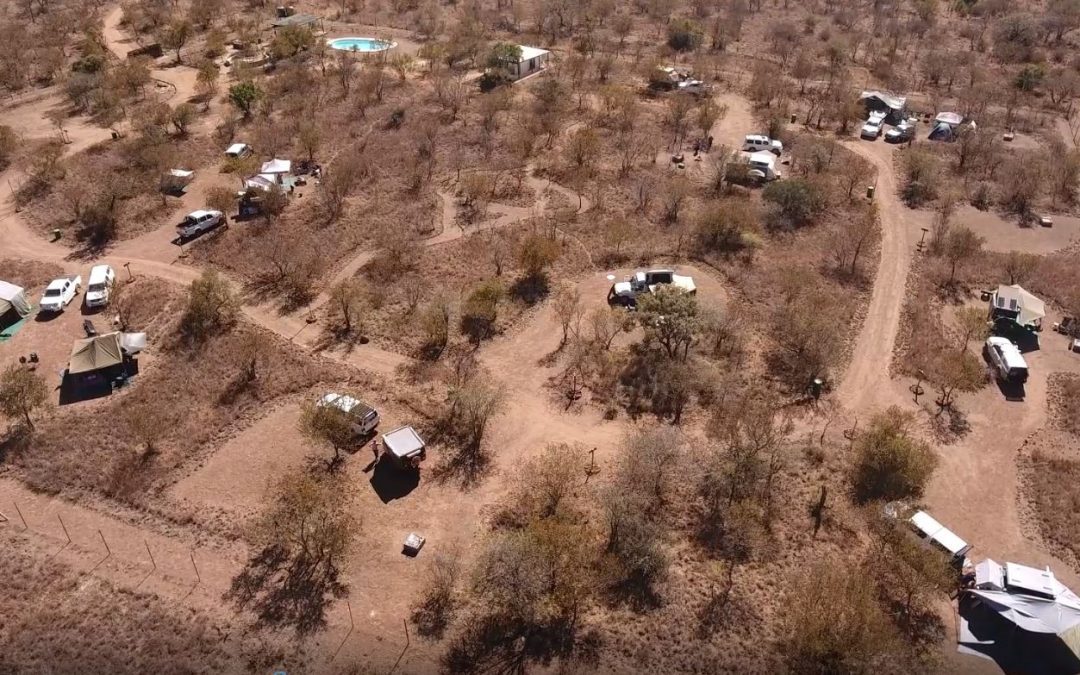 When camping restrictions lifted in the beginning of August 2020 (they were implemented due to Covid-19) we started looking for a place to camp during the long weekend of 7 – 10 August. Dinokeng Game Reserve is situated in our province (and we were only allowed to camp within the borders of our province), so we enquired about possible camping sites. Little did we know that the whole of Gauteng was doing the same. Camping places were scarce, and most were fully booked. We came upon Lefokeng who had just opened their grounds by accident, and let me tell ya’all, we weren’t sorry (cue: American accent).

To get there, one of two route options from Pretoria can be taken: 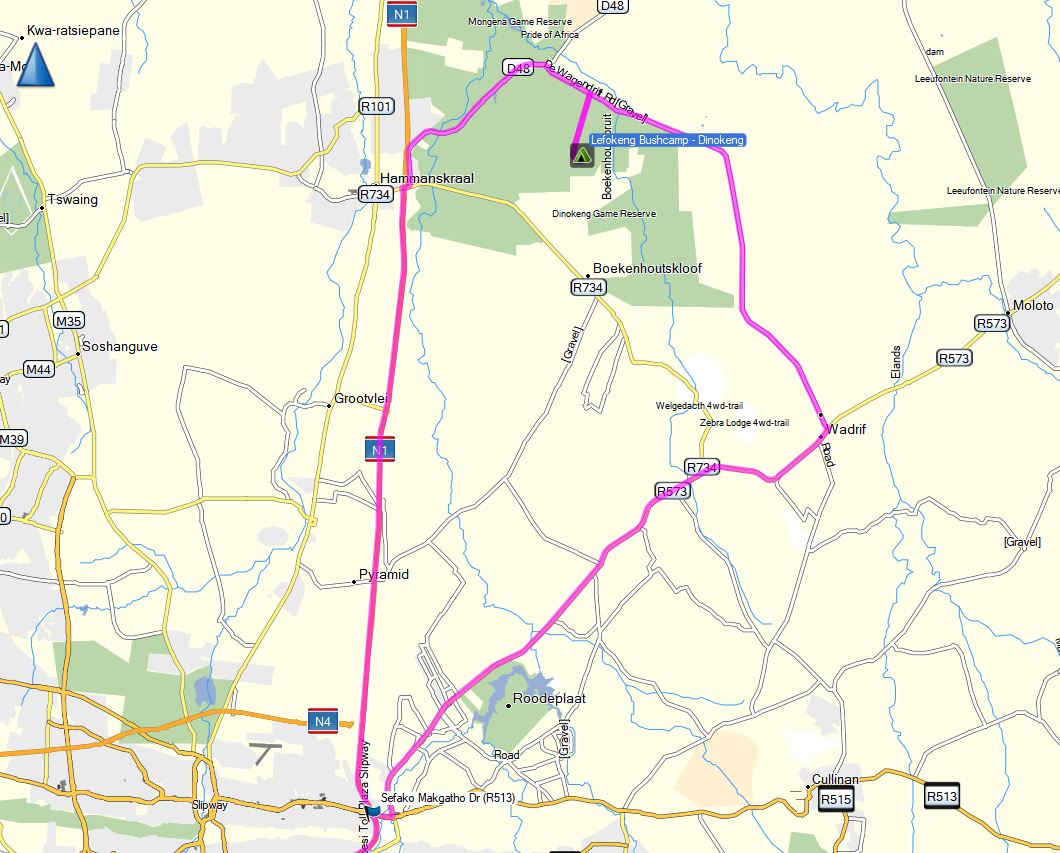 Take the N1 north from Pretoria to the Hammanskraal offramp.  Then take the offramp and turn right over the highway and then left onto the first road, the D48.  Follow the D48 for 11km till you find the Safari Mall on your left.  Continue the D48 for a short distance and cross the cattle grid.  The first road right after the cattle grid is the Wagendrift Road (this is a gravel road).  Turn right on the Wagendrift Road and follow this for 3km until you will find the turnoff to Fisant Road on your left.  Follow Fisant Road to the T-junction at Elephant Waterhole.  Then turn left at the T-junction and left again on a small two track road.  Take the first road right and right again at the first turn-off and you have reached Lefokeng Bush camp. The total distance from the Zambezi offramp on the N1 to Lefokeng Bush camp is 50km.

The second option is to take the Zambezi offramp from the N1 and to turn towards Cullinan on the R513.  After a short distance turn left on the Moloto Road (R573) and follow this road for 34km to the turnoff on the Wagendrift Road on your left. This is just after you have passed the Wadrift Supermarket and OK Bazaars.  Turn left on the Wagendrift Road (gravel road) and follow it for 24km to the Fisant Road turnoff on your left.  Follow Fisant Road to the T-junction at Elephant Waterhole.  Turn left at the T-junction and left again on a small 2 track road.  Take the first road right and right again at the first turn-off and you have reached Lefokeng Bush camp. The total distance from the Zambezi offramp on the N1 to Lefokeng Bush camp is 63km.

The campsite does not have water or any electricity points and is basically just a clearing in the bush where you can camp with no grass.  True to the name, as well as it being advertised as a “Bush camp”. We were informed by the owner that they are planning to provide water points (taps) for the campsites at a later stage.  At this point all that is provided is a very sturdy, nicely built braai (handmade) and a rubbish bin.

Along the circle route through the campsite there are solar lights that provide light should you want to go the ablution block at night. Not that this is necessary, as the paths to the ablution are well laid out, and the lights have a timer and switches off at a certain time during the night. None of the lights shine directly onto the camping sites and were not a hindrance to us at all. The lights are solar powered.

With the prior permission of the Lefokeng Owners we took an aerial view of Lefokeng Bush Camp.

The small, but neat, ablution block consists of 2 female and 2 male bathrooms, each equipped with a toilet, shower and handwash basin.  Being immune compromised, we were hesitant to use the ablutions without taking along our own sanitiser and cleaning before we used it. But boy, were we wrong. The ablutions got cleaned with strong chemicals frequently, and we never felt that we were compromised. The only suggestions that we suggested to the owners were more hooks for hanging clothes and toiletry bags in the female ablutions. There is also a place on the outside where you can clean your pots, pans, and cutlery.  Warm water is provided by gas operated geysers, and there are electric lights within the bathrooms. 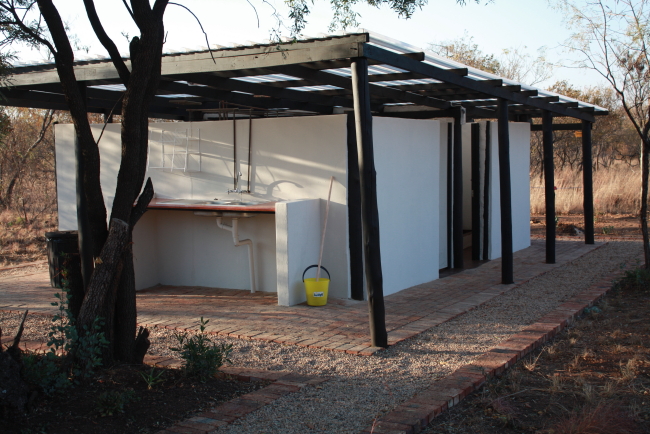 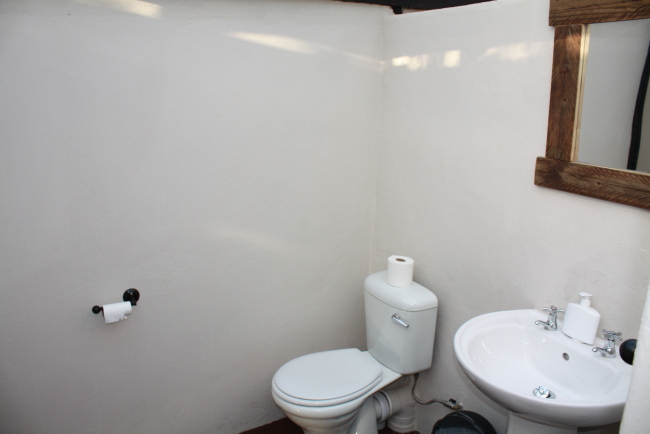 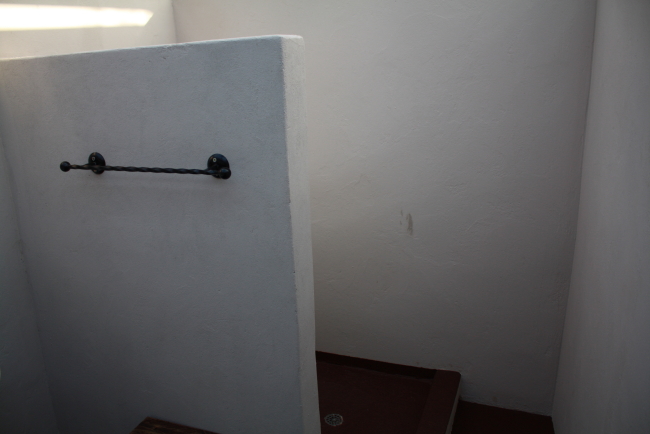 There is a swimming pool (cold water), a paved area with a roof, braai facilities and a boma where you can relax and also entertain if you are a big group of people. The swimming pool has a seat around the inside of the pool and it does not appear to be very deep – this would be a huge positive if you have small kids and are worried that the pool might not be as safe. 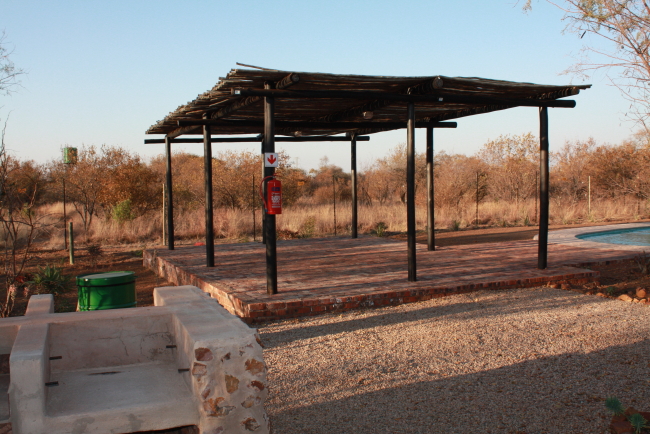 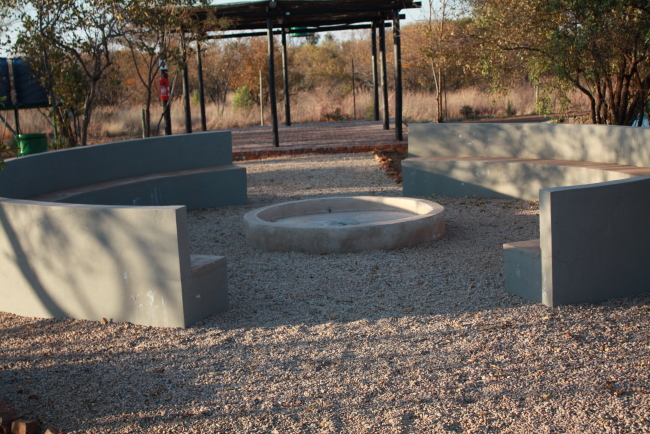 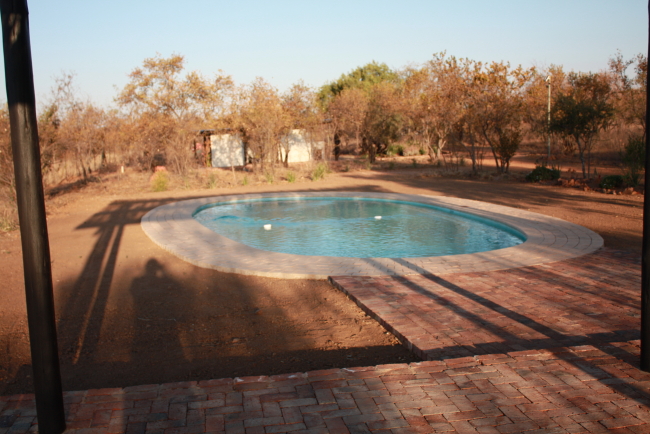 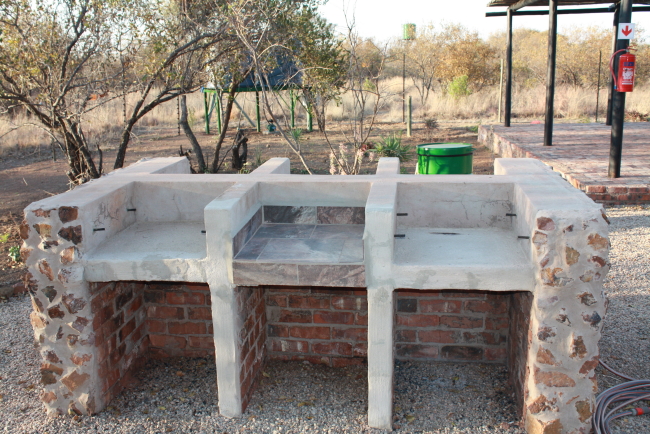 The campsite, although fully booked at the time, was very quiet. You have some distance from your neighbour and have a lot of privacy because the sites are so big. No one needs to walk through your camping site to get to theirs. During our stay, it was winter, so campers went to bed early, but even so, I imagine that during warmer periods, Lefokeng caters for a specific camper that enjoys the bush experience as well as the tranquillity the surroundings has to offer. Campers facing the fence had animal sighting, and whilst we were there, some reported sightings of Zebra and Kudu and the distant roaring of lions at night.

You can experience a lovely sunset at Lefokeng, as well as be treated to the sound of yipping jackal at night-time. The nearest to the full bush experience that we have had at Dinokeng.

In other campsites in Dinokeng we experienced traffic noise from the main routes around the park or from nearby villages.  This was not the case at Lefokeng. 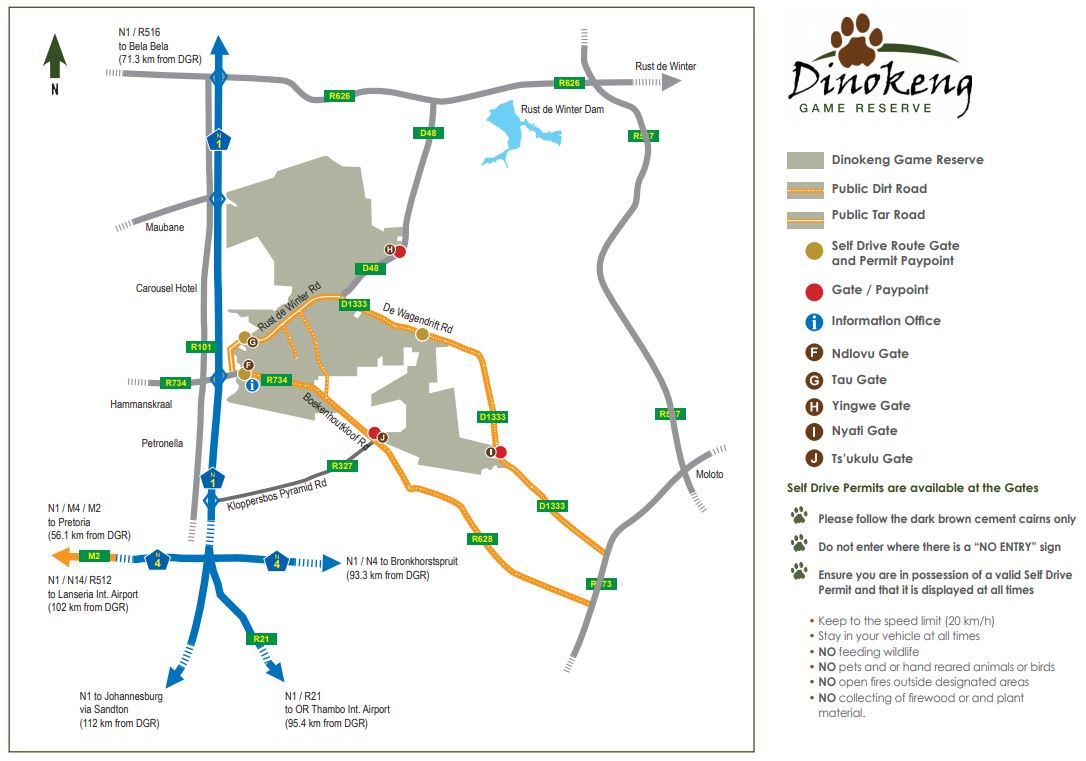 Permits are per vehicle and at the time of our visit the cost was as follow:

The vehicle entry fee of R 50 per vehicle is already included in the cost of the permit.  It is advisable to buy your self-drive permit when entering the gate.

A conservation fee of R 80 per adult, R 50 per Child and R 50 per vehicle is payable when you visit Dinokeng.  You pay these fees at one of the gates when you leave the Reserve.

You can read more about the Dinokeng Reserve on their website.

Lefokeng caters for a specific camper. You must be self-sustainable regarding electricity (solar panel), and it is advisable that you have an off-road caravan or trailer. If you want to experience peace and tranquillity, then Lefokeng is for you.

Will we visit Lefokeng Bush camp again?  YES! In fact, I predict that this camp will become the “go to” for everyone that just needs to get away and experience a true bush-camp.

The owners are super friendly, open to suggestions and very enthusiastic to make your stay at Lefokeng as enjoyable as possible.

We have already booked our next camp at Lefokeng …

Well done Marius and David – Lefokeng is indeed something to be proud of. 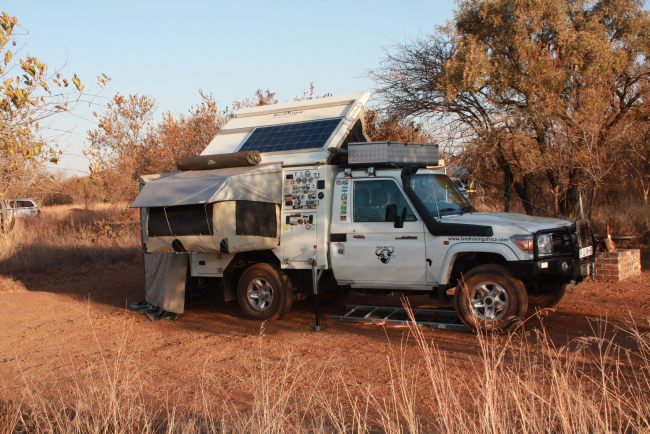